Gender troubles in (art) education performative workshop discusses the hegemonic re-production of gender roles within institutions of art education in Greece in regards to the experiences of queer feminist subjectivities. The workshop focuses on feminist art and education practices that provide space and time for knowledge and art production through the politics of care, collaboration, solidarity and empowerment. The workshop seeks to contest the problematic aspects of art education in Greece, which form the on-going condition in which we teach and learn: the absence of gender theory within the academic curriculum and the lack of an institutional and policy framework, the inadequacy of the activistic attempts in this context along with the sporadic sensibilisation of individuals (within or on the sidelines of the artistic practice and education), and the impossibility of a sufficient and community forming institutional critique within the existing structures. In order to counter these disciplinary trainings in consensual patriarchy, seen as structural component of art labor and education in Greece, we are calling for queer feminist practices of learning and instituting education which reclaim the voicing of complaint, frustration and anger. Our premise is that art education should be perceived as a densely contested space, where transformative sharing on the politics of empowerment, vulnerability and affect is needed. We invite you to address our everyday experience and desires through listening, writing, shouting, laughing and sharing. How can we talk to each other facing the consolidation of invisibility, discrimination and sexism, in order to give more space to the mutual care relation between feminist subjectivities and practices among students and teachers? In which ways can we strengthen measures to take care of each other and to dismantle power relationships within learning procedures, given the fact of the complete absence of institutional policies for making formal complaints on harassment? How can we resist against “macho genius artist” attitudes and rival relationships among privileged subjectivities? In which ways queer feminist subjects raise their voice and reclaim space when the politics of desire get instrumentalized, co-opted or optionally silenced within a specific cultural field? The workshop invites art educators/art students. It constitutes an initial attempt to address these issues and open up a discussion as an on-going process. The workshop will be mainly held in Greek. Please note there will be translation to/from Greek Sign Language upon request.

Registration till June 10th 2019 at aphroditeprojectathens@gmail.com

‘The Cornucopia of Greekness: Copies and Performances of a Body That Never Was’
Essay 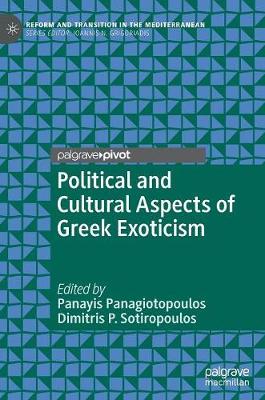 This book explores the new Greek exoticism by examining political and cultural mechanisms that contribute to Greece’s image and self-image construction. The contributions shed light on the subject from different perspectives, including political science, history of ideas, sociology, cultural studies, and art criticism. In the first part, the book provides a historical review with a focus on philhellenism, perceptions of antiquity and modernity, and the evolution of Greece as an idea. The second part looks at the current Greek crisis and analyses ideological, political and cultural aspects and stereotypes that contributed to the formation of contemporary Greek culture. The third and final part discusses notions such as aestheticism, idealism and pragmaticism, and deconstructs narrations of Greece through artistic media, such as films and exhibitions, which present a new oriental Utopia. 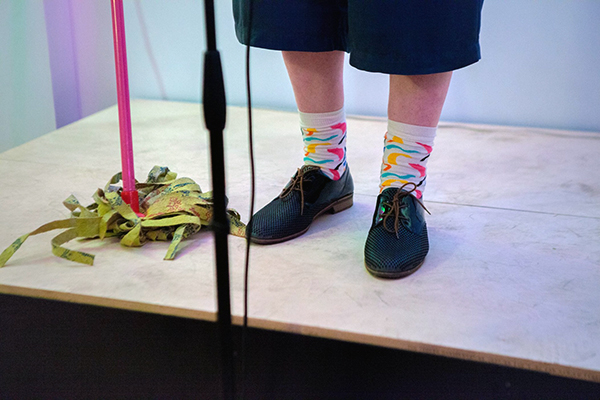 NTIZEZA is a new space and a platform for the support, education and celebration of femme artists in Athens, Greece. Come and feast your senses to a fantasmagoria of local performances and let us all indulge in Ntizeza’s opening event!
Performances by: BIKA LA DE BIKA DESPINA SEVASTI EGGS&LEGS FURASU YORU NATA DADA ZHMY
After show tunes by ALEX TSOLI Pre-show playlist by CHRISANTHY ONCOW
doors 8.30, performances 9.00pm
free entrance 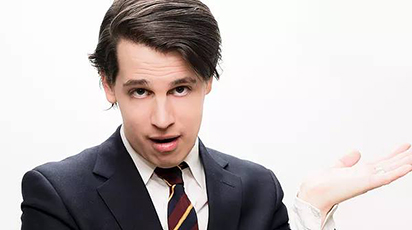 Is so-called political correctness here to destroy Greek arts? Do feminist and queer politics ‘censor’ artistic expression in the “birthplace of democracy”? How can you push boundaries without being an asshole? In this panel / discussion, we address a series of difficult questions around creativity especially in the context of politically motivated work from/in Greece. From provocative media projects to internet edgelords, and from camp hyperbole to unhinged bullying we will attempt mapping a muddy but essentially contemporary debate.

The Statue Lake/ Is your Figure less than Greek? 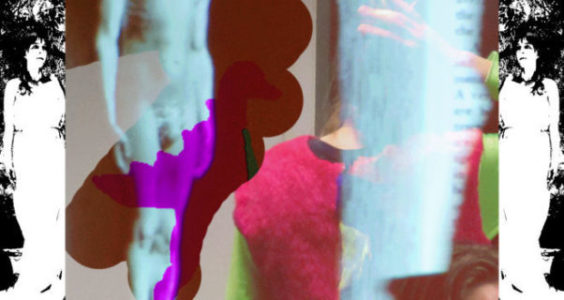 In her performances, Miss Pink Dinosaur addresses the apparatus reproducing anoriginal Greekness while speaking about the institutional, formal and reproductive particulars of higher education that aspiring artists receive in Greece. This is a performance about Greekness as the cradle of whiteness, ranging from 19th century hymns to the Glory of Greece that were foundational to the colonisation of the Americas, to the marblewashing of the Greek Civil war, the biopolitics of the heteronormative modern body in relation to the Greek statues, standpoint narratives from the endangered species of the feminist art teacher in Athens and reflections on the Learning form Athens of documenta 14. Some singing too.

Screening of One Day


“Words speak louder than images”
Feminist & Queer Poetry-Films & Film Poems by Greece-based and diaspora artists
Featuring short films by: Margarita Athanasiou, Athanasios Anagnostopoulos, Eva Giannakopoulou, Anastasia Diavasti, Eggs & Legs + Clitus Clitoris, Kassiani Kappelos, Fenia Kotsopoulou, Alkis Papastathopoulos, Procne+Philomela, Despina Sevasti, Eva Stefani, Danae Syrrou+Nanah Palm+Louisa Doloksa
In this collection of films we bring together for the first time feminist and queer film poems and film essays from Greece, as well as artists of the greek diaspora. The films we have collected may have significant aesthetic and methodological differences, but they all have in common both the expression of identity politics claims and the use of language / text at the core of the way they develop their communication structures. The series of these films is presented to accompany the screening of Antoinetta Angelidi’s piece “Topos”, a pioneering feminist work of Greek cinema from 1985, in a rare 35mm projection opportunity with English subtitltes.

The Cornucopia of Greekness: copies and performances of a body that never was. 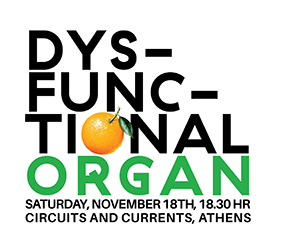 Responding to the rampant privatization imposed by the complicity of the State and the capital, collective experiences of resistance and feminist strategies are widening the political horizon of Athens. Stavros Stavrides and Despina Sevasti will address the politics of desire, temporary alliances and power relations embedded in the public space. This discussion will be the framework for a critical mapping of the city.

Despina Sevasti and Roger Sansi, together with Josep Lluis Lancina, propose to us a performed class about the recent cultural context of Barcelona and Athens: What is the role of the big cultural events (for example, Documenta14) in the transformation of the city? Which speech and counter-speech forms are generated in infamous contemporary cultural events? Which cultural policies answer discursively to the “crisis” of each city? This session will share space with first year students of the Fine Arts degree and with the Anthropology of Art department of the University of Barcelona.
Mixité is a collective project directed by Marta Carrasco and Sergi Selvas from which we develop transversal projects that promote the proactive role of the community from the participation-action research and the collective pedagogy.

As part of the Occupy Atopos project, the conceptual art duo FYTA are occupying the premises of Atopos cvc for a week of creative disorder. To celebrate five years since its inception, FYTA are organising an exhibition of their work that will also include performances, lectures and discussions from October 8 until October 13. The exhibition will include artworks by FYTA, pieces from their personal archive and portraits of the duo by various artists. The week will start with an interactive happening on October 8 during which their hot-off-the-press The Black book of FYTA [Nefeli Publications, Ed. by Athanasios Anagnostopoulos] will be launched. The book includes texts on politics in art by academics and artists from Greece and the UK. 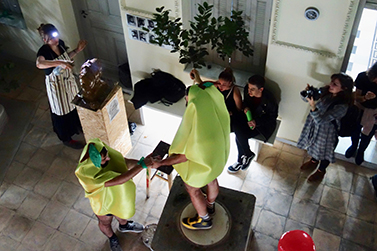 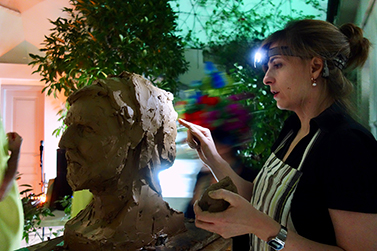 Fytosculpture performance at the opening, Sunday 8.10.2017 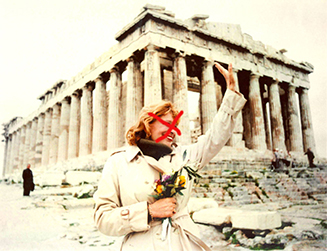 The Griefers of Bandung

A novella published in the context of the DAI 2016-17 COOP Academy Publishing Class, I Left my pdf in Arnhem, curated by Sarah Pierce and Tirdad Zolghadr.
2017 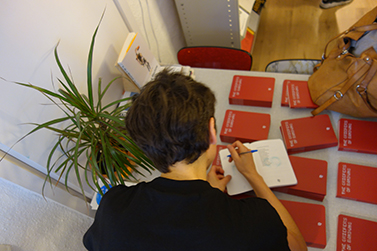 Documena would like to invite you to an extravaganza of biblical proportions. Everybody’s favourite online presence at a time of a profound crisis of values, the land of the palingenetic queer, becomes flesh and bones this Holy Saturday towards Easter Sunday aiming at the exaltation of the faithful towards an incorporeal Pnyx. With the power of the Delta!

Night of January 16th: A counter-play 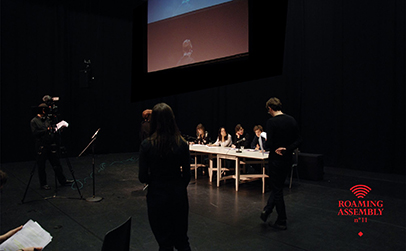 “We are turning towards (….) a nineteenth century United States Supreme Court case that would prove foundational in the establishment of corporate personality as it is understood today in the United States. We’re going to stage the filming of the testimony in question as a series of screen tests. There are some prepared answers to some prepared questions. A lawyer should never ask a question to which s/he doesn’t know the answer, as the saying goes. Since we are not lawyers, there will hopefully also be some unprepared questions.”

Huis Oostpool, Nieuwstraat 58, 6811 HX Arnhem
Video of the performance
The Strange Case of the Case